The Cult of Mithra: Sacred Temples, and Vedic Legends, and Ancient Armenian Understanding

Mithra was the god of light, purity, goodness, and truth and occupied an important place in the faith of the ancient Aryans.

The Spread of Mithra

There are various opinions on the spread of the Mithra (or Mithras, Mitra) cult, but the most reliable one is the first written protocol about the Mithraic cult from 14th century BC.

In the treaty text signed between the powerful kingdom of Mitanni (Mitanni was situated in the North of Armenian Plateau) of king Shativaza (unknown-1350 BC), and the Hittite king of Suppiluliuma (1380-1346 BC) we can see the name of Mithra. So the Mithraic cult was mentioned in Persian cuneiform inscriptions and in the Indian Vedic texts since the fourth century BC.

As a result of the religious revolution of Ardashir II , the Sassanid King of Persia in 395 AD, the cults of Mithra and Anahita, the Iranian goddess, were imported to Persia and combined with Zoroastrianism. In the first century BC the cult of Mithra penetrated into Rome, and in the third century AD this religion had become international and spread from India to the Black Sea, from the Balkans to Britain and Spain. There are more than four hundred Mithraic temple ruins throughout Europe.

So at first, in fourth century BC this cult spread from the Armenian Plateau to South Persia and India and in first century BC to North-West Europe.

In Upper Armenia, the main temple of Mithra (or Mihr) was built in the village of Bagaritch, Derjan region (eastern Turkish territories). The temple of Garni was also dedicated to the cult of Mithra. 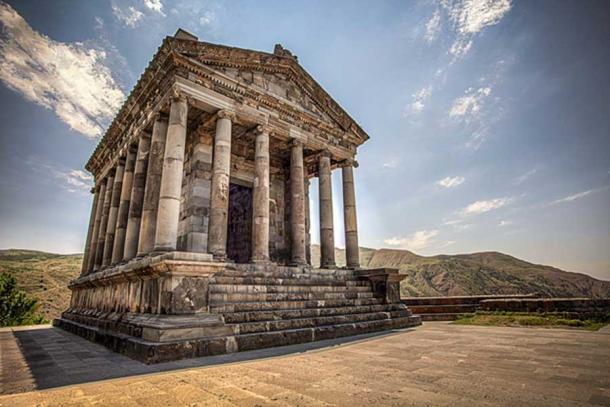 The Temple at Garni dedicated to Mithra. (Via Lilit Mkhitaryan)

In the city of Artashat, Mithraic temple ruins have been unearthed which were built from black marble and reconstructed in the first century AD by Tiridates I, King of Armenia of the Arsacid Dynasty. A statue of Mithra sits near the tomb of Antiochus I on Mount Nemrut (southeastern Turkey). He can be seen sitting on the left side of Aramazd, creator god in pre-Christian Armenian myth. 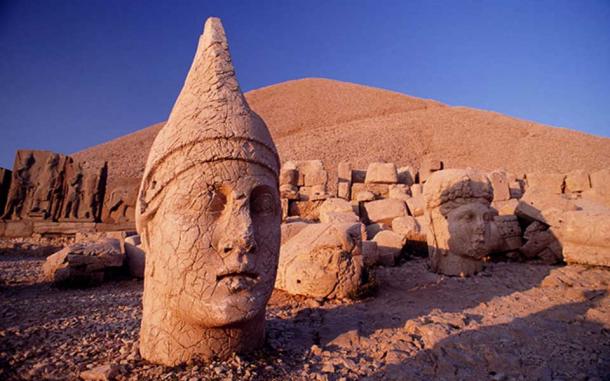 In the ancient Armenian “Daredevils of Sassoun” epic we can also see the character of Mithra.

In ancient sculptures Mithra was often portrayed as a powerful young man with a Phrygian or Armenian cap who kills a sacred bull , called the tauroctony. 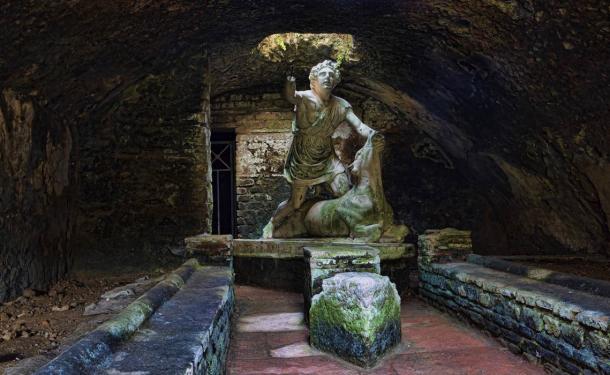 Statue of the god Mithras killing a bull in the thermal s mithraeum in archaeological excavations of Ostia Antica – Rome . ( Equatore /Adobe Stock)

In the Armenian pantheon Mithra was the god of the light and purity. It’s believed that a temple dedicated to Mithra also has been found in Armavir, the ancient capital of Armenia.

The cult of Mithra began to disappear in the fourth century BC.

According to Armenian ancient beliefs, 365 saints are living in the heart of the Sun and each of them is the owner of one day of the year, appointed in order to prevent evil.

It is said that within the salty sea (Lake of the Van), there was a rock, and when heaven was darkened the light fell on the rock and shortly after Mithra was born. He was naked except for the Phrygian hat on his head and he held a torch in his left hand which illuminated the world. By killing the bull, Mithra was creating the world from its parts. 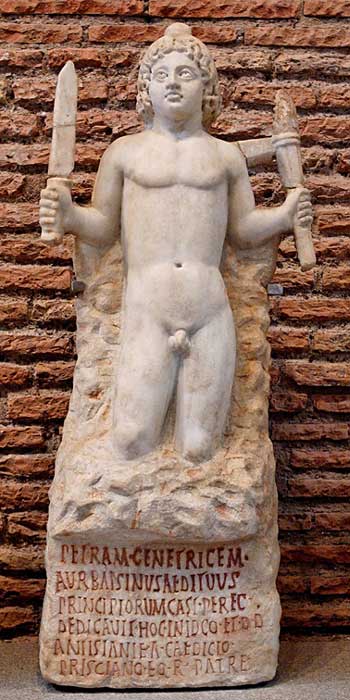 Strabo chronicled that during the ruling of Achaemenid Empire the Armenian Satrap donated 20,000 horses to the annual Mithra celebration. The observations dedicated to Mithra were celebrated by Armenians in the Month of Areg, which coincided with Iranian month of Mithra. The Armenian seventh month is named Mehekan and each month’s eighth day was called Mithra.

Mithra, the god of light , kindness, and contracts was indeed born from the very rock—this characteristic is affirmed by archaeological finds and the Geghard temple in Armenia, which is carved into the rocky landscape.

In 1953-54 during research in Eskikale (Turkey) a tunnel was unearthed which reached depths of 160 meters (525 feet) consisting of a long mountain slope ending with two circular rooms. It is similar to the tunnel at Bagaritch in Upper Armenia with the temple complex dedicated to Mithra.

From the mythological point of view, tunnels are the place of birth of Mithra, as it said, “the beam, separated from the star, penetrates into the depths of the tunnel, giving birth to Mithra, from where he ascended to heaven.” The carved temple of Geghard has also been seen as the birthplace of Mithra during the pre-Christian period. 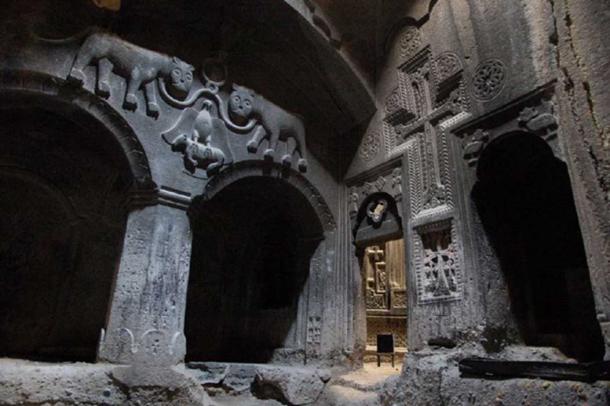 The Cult of Mithra in Vedic Texts 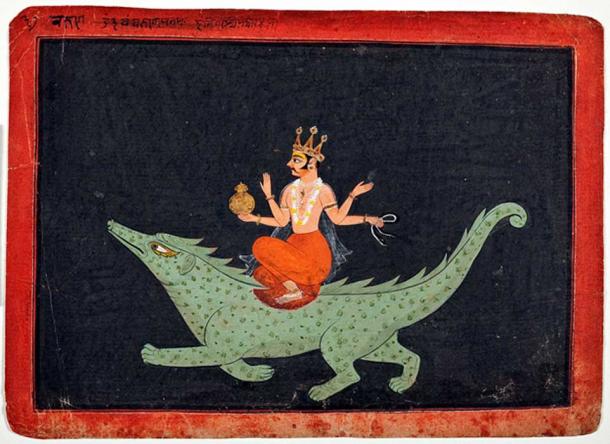 Vedic texts are notable for the main ritual of the Mithraic cult, such as sacrificing a bull, which penetrated to Europe. One of the noblest gods is Soma (in Avesta, the primary collection of religious texts of Zoroastrianism, he is named Haoma instead). Soma is the god of invincible power, the god who cures all the diseases. It is Soma who gave life, wealth, and wish fulfillment.

In Sanskrit, the name Soma is used for the Moon. They are the same only by name, however, as all the characteristics of the Moon are attributed to a goddess of plants. So, they believed the moon presided over healing plants and thus sacrificed oblations and offerings in worship rituals.

Also Soma is the name of a sacred plant. A strong alcoholic beverage loved by the gods and dedicated to the gods was made from the leaf of this plant. During rituals, priests drank this beverage in order to come close to and join with the gods. Soma was the life deity and life essence, and even though the gods received their eternity from this beverage, mortal men could attain temporary ‘eternity’ by drinking the beverage too, allegorically meaning the joining with the God and Essence.

According to legend a riot arose between the gods. The god Shiva got involved in the formidable fighting and in one stroke divided the god Soma in two, which demonstrates the tradition of the sacred bull killing.

In other versions of the story, the gods decided to kill Soma. The god Wayuu ordered the execution and asked for help from Mithra-Varuna. Mithra refused to help and said, “I wish love, boon and affection to everybody.” But in the end Mithra agreed to participate in ritual killing to benefit from the sacrifice. After the killing they crushed Soma between two stones. It was Mithra’s responsibility to spill part of his Soma juice on the ground, from which the plants and the animals would germinate.

In pictures and sculptures of the bull sacrifice ritual, Mithra is often seen turning his face and eyes away, indicating the god’s rejection or distaste in completing this action. But the bull is the source of life, and the ritual is necessary.