The Saqqara royal burial necropolis south of Cairo, Egypt, is perhaps 2020’s most revealing ancient site. It seems that every month new treasures are presented from this deeply-sacred burial complex. Now, Egyptian antiquities officials have announced the discovery of a collection of around 40 gilded burial statues to add to the trove of the site’s archaeological treasures.

Capital City of the Other World

Last month Ancient Origins published a news story about the discovery of a hoard of well-preserved ancient Egyptian coffins at the Saqqara necropolis about 19 miles (30 km) south of Cairo. The Saqqara UNESCO World Heritage site is the location of the world-famous Pyramid of Djoser (or Step Pyramid ), and 10 others, and hundreds of tombs dating from the 1st Dynasty (2920-2770 BC) to the Coptic period (395-642 BC).

A statue of the god Nefertem found with wooden coffins in the Saqqara tombs. ( Egyptian Ministry of Tourism and Antiquities )

Since September, antiquities authorities have announced the discovery of at least 140 sealed sarcophagi, with mummies inside most of them, from the same area of Saqqara. Mostafa Waziri, secretary general of the Supreme Council of Antiquities , told reporters on Saturday that excavators have found “other shafts full of coffins, well-gilded, well-painted, well-decorated.”

According to an article in The Independent , some of the “100 colorfully painted and sealed sarcophagi (coffins) still have mummies inside” that were found wrapped in burial cloths dating to over 2,000 years ago. Tourism and Antiquities Minister Khaled el-Anany said the items date back to the Ptolemaic dynasty that ruled Egypt from around 320 BC to about 30 BC, and the Late Period (664-332 BC). 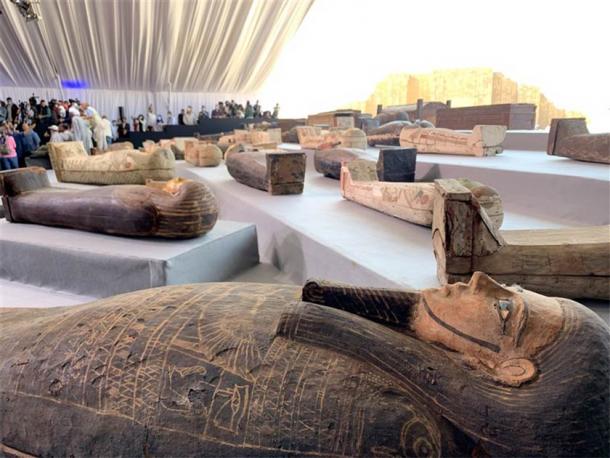 Some of the sarcophagi recently found at the Saqqara necropolis. ( Charlene Gubash / NBC News )

When new coffins are discovered they are immediately transferred to controlled laboratories where teams of scientists study the remains. X‐rays of the mummies allow close analysis of ancient skeletal structures, which hold clues as to how they have been preserved. After these new mummies were tested they were exhibited briefly at the base of the famed Step Pyramid of Djoser.

Khaled el-Anan said the mummies would ultimately be moved to at least three Cairo museums, including the  Grand Egyptian Museum (GEM) that is currently being built near the famed Giza Pyramids. GEM is currently one of the largest museum development projects in the world and is a direct response to the global fascination with ancient pharaonic and Egyptian history.

Arab News say the 100 coffins were found “in three burial shafts at depths of 12 meters (40 feet)” and that one coffin contained a mummy that had been “wrapped in a burial shroud adorned with brightly colored hieroglyphic pictorials.” The highly-ornate, colorful and gilded wooden burial statues, according to the Egyptian Ministry of Tourism and Antiquities’  Facebook page, are “unique” and depict scenes and figures from Egyptian mythology . It is thought that they had been placed in the shafts along with the deceased “to help them in the afterlife.”

Burial statues and sarcophagi from the Saqqara necropolis. ( Youm7)

Drip-Feeding Treasures to Rebuild a Nation

You don’t have to be a marketing specialist to have noticed that Egypt has a lot up her sleeve and the Ministry of Culture are quite obviously drip feeding their treasures to the world. This approach to announcing archaeological discoveries is required to rebuild the damaged tourism industry that all but collapsed after the 2011 popular uprising that toppled longtime autocrat Hosni Mubarak. And just when the country was getting back on its feet, this year the coronavirus pandemic caused major setbacks. Considering the political upheaval and the 2020 lockdowns, it is of little wonder Egyptian authorities are not throwing everything out there at once.

It is not surprising that Mostafa Wazir said the Ministry would announce “another major discovery at the Saqqara necropolis later this year .” But moving forward, archaeologists and excavators working at the ancient royal burial complex at Saqqara hope that they will find ‘the holy-grail.’ And in this context, that prized-treasure comes in the shape of the ancient workshops in which the wooden statues were whittled and gilded, and where the colorful wooden coffins were designed, assembled, and decorated.