Among the thousands of pieces of parchment found in caves near the Dead Sea, one scroll was unique among the rest. The Temple Scroll was the best preserved and with the clearest writing. Now scientists have revealed that ancient technology, involving the application of minerals and salts that came from afar, helped preserve this unique text.

About 2,000 years ago, just north of the Dead Sea, in the region around the ancient settlement of Qumran, the Dead Sea Scrolls were placed in jars and hidden in 11 caves in an attempt to protect their religious and cultural heritage from the invading Romans.

In 1947, the caves were explored by Bedouin shepherds who discovered roughly 900 full or partial ancient Hebrew scrolls which had been buried by members of a sect called the Essenes who played a central role in the development of both Judaism and Christianity. Now, scientists can say with certainty that the Dead Sea Scrolls are among the best-preserved examples of ancient writing ever found, and that their origins are still unknown. 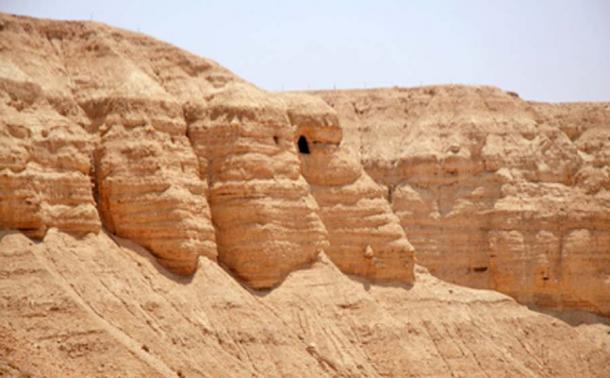 Caves at Qumran where the Dead Sea Scrolls were discovered. (Tamarah / CC BY-SA 2.5 )

They Aren’t From These Parts

The new study was published on Science Advances and it says the “very best” preserved ancient text is the ‘Temple Scroll’ and at 25 feet (7.6 meters) long it has both the clearest and whitest writing surface of all the scrolls and the thinnest material measuring a mere “one-tenth of a millimeter, or roughly 1/250th of an inch thick”.

Admir Masic is an assistant professor of civil and environmental engineering in the Department of Materials Science and Engineering faculty at MIT, and a fellow in archaeological materials. He and co-author James Weaver, from the Wyss Institute at Harvard University, say in the new report that the scroll’s excellent state of preservation is due to a “combination of salts”, but that they were different from the typical composition found on other parchments which established that they didn’t come from the Dead Sea region. 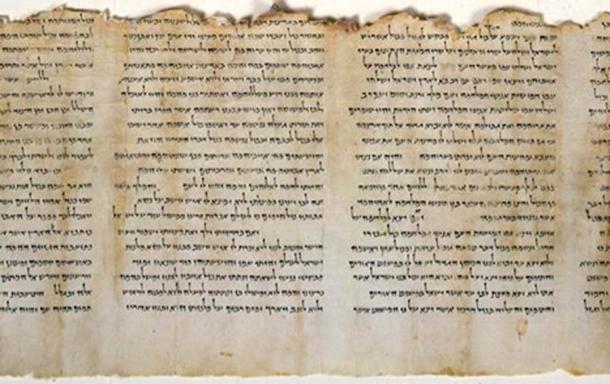 The Temple Scroll of the Dead Sea Scrolls. Source: The Israel Museum.

The Temple Scroll is From Unknown Origins

The new paper greatly focuses on one large section of the scroll measuring about 1 inch (2.5 centimeters) across. Specialized tools were used to produce high resolution mapping of the salt’s chemical composition and so that both biological and non-biological materials would be characterized “under more environmentally friendly conditions,” Masic said that they performed large-area, submicron-scale, non-invasive characterization of the fragment.

Parchment was made by repeatedly rubbing salt into animal skins and the particular section of the scroll being studied had remained uncontaminated since its discovery. This allowed the scientists to analyze the original composition and across the surface of the parchment they discovered varying proportions of sulfur, sodium, and calcium. But even with these new chemical fingerprints the team has not yet been able to pin point where salts found on the Temple Scroll originated.

What is known for sure is that the parchment’s bright white surface does “not match that of the Dead Sea water” and it must have been from a distant salt evaporite deposit. A Science 2.0 report quotes Masic as saying, “this work exemplifies exactly what my lab is trying to do – to use modern analytical tools to uncover secrets of the ancient world”.

Might the Copper Scroll Be Hiding “$1billion (£770 million)” in Treasure?

The new microscopic mineral analysis confirms the salty coatings are highly hygroscopic, which in layman’s terms means they greedily absorb moisture in air. This will directly degrade the underlying parchment and the scientist say these new results highlight the need to store the ancient scrolls in a humidity controlled environment, “at all times”.

While most of the Dead Sea Scrolls were written on parchment and discovered by Bedouins, the Copper Scroll , the 15th and last, was discovered by an archaeologist on March 14, 1952. At the time, the corroded metal could not be unrolled conventionally and it was sent to a team of specialists at Manchester University’s College of Technology in England.

Two years later in 1952, under the recommendations of English archaeologist and Dead Sea Scrolls scholar John Marco Allegro, the scrolls were cut into 23 strips and Dr. Józef Tadeusz Milik published his official transcription 1962. The scroll was re-photographed in 1988 and in the mid-90s conservation efforts by Electricité de France included evaluation of “corrosion, photography, x-rays, cleaning, making a facsimile, and a drawing of the letters”. 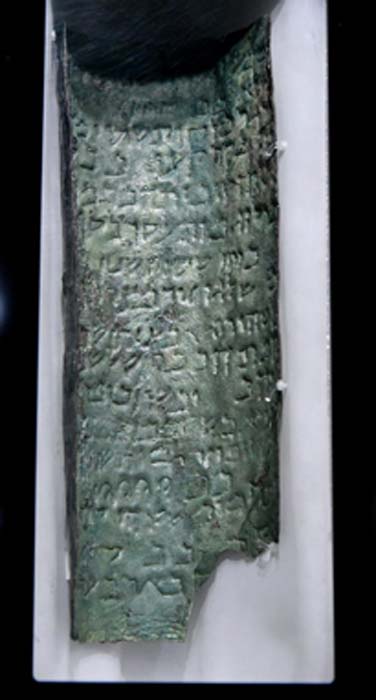 Strip of the Copper Scroll from Qumran Cave 3 written in the Hebrew Mishnaic dialect, on display at the Jordan Museum, Amman. (Neuroforever / CC BY-SA 4.0 )

Previous articleForensic Facial Reconstruction: The Journey to Connect with our Ancestors
Next articleTiny owl found hiding in the Rockefeller Christmas tree isn’t going home. Here’s why.